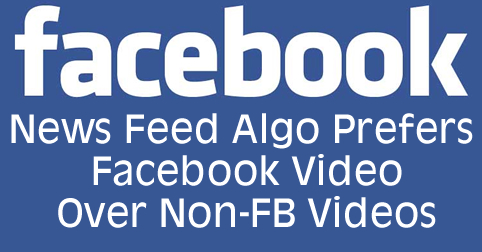 The Wall Street Journal had an article detailing how Facebook is trying to attract some of the big name YouTube video creators to upload their offerings to Facebook.  After all, Facebook can monetize their own videos but they can’t monetize a video that a user simply links to, and they are also looking to make a dent into YouTube’s massive video market share.

Jack Vale, a comedian who creates prank videos, has been sharing both Facebook videos and YouTube videos, but he noticed that those uploaded to Facebook perform much better.

One content creator who has been experimenting with putting his videos on Facebook is Jack Vale, a comedian specializing in prank videos, who has built a following of nearly 1.2 million subscribers and has generated over 224 million views on YouTube. Over the past few months Mr. Vale, who is part of the Fullscreen network, has been experimenting with Facebook. The results have been “phenomenal,” he said although he isn’t making money on Facebook yet.

Still Mr. Vale continues to test the site, to build up his own following, and for now, to drive fans to YouTube, where he does make money. However, he says he has noticed that any Facebook posts designed to simply drive viewers to YouTube tend to perform poorly in Facebook’s algorithm. Thus, he has taken to posting shortened versions of his YouTube videos to Facebook, while including links to the full clips in the comments below the videos. That way he is able to tap into Facebook’s audience, while sending viewers to YouTube, where he can cash in.

It is a smart – and seemingly effective move – to outsmart the Facebook algorithm by simply uploading teaser videos to Facebook, then leading those viewers to the full YouTube video.

If you are sharing videos on Facebook, you are better to upload the video to Facebook so it is seen by more Facebook users, rather than directing them off-site.

Google has released a new version of the Google quality rater guidelines, a year after the last … END_OF_DOCUMENT_TOKEN_TO_BE_REPLACED