You are here: Home / Local / Sued for Leaving a Negative Review? It Will Soon Be Illegal in the US 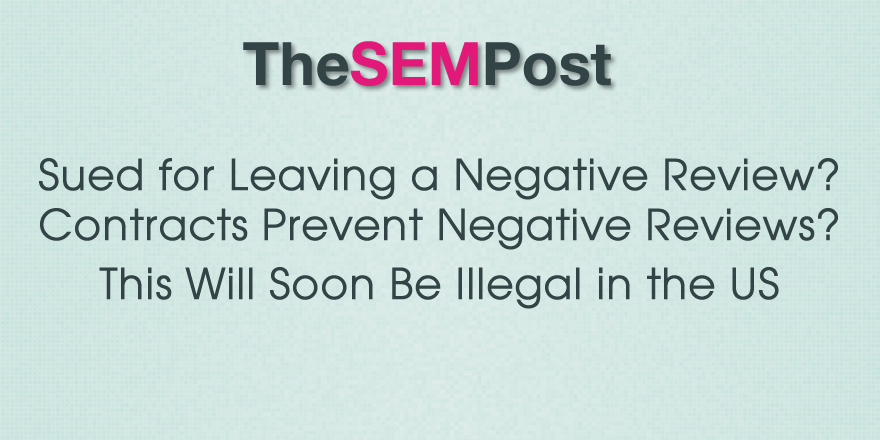 We have periodically heard of the lengths some businesses go to in order to prevent negative reviews, or to see them removed after the fact.  And it is in everyone’s best interests to ensure that online reviews are as honest as possible, and if a business prevents negative reviews, it can give others the false impression that the business only has great reviews, when that might not actually be the case.

Despite many of these businesses suffering severe backlash for approaches where they attempt to prevent negative reviews by suing or imposing fines, it repeatedly happens.  And this new law, which has already passed Congress, just requires Obama’s signature for it to become law.

The upcoming law is called The Consumer Review Fairness Act, and was first introduced in 2014 after some well publicized cases.

KlearGear is the most famous case, but there have other cases such as the Union Street Guest House, which included a clause that a bridal party would be charged $500 for any negative reviews that guests leave.   But these types of situations are becoming more common in an era where online reviews are an important part of the decision making process by many.

The new act would void anything in a contract that prevents leaving negative reviews.  According to Ars Technica:

The Consumer Review Fairness Act—full text available here—voids any provision in a form contract that prohibits or restricts customers from posting reviews about the goods, services, or conduct of the company providing the product or service. It also voids provisions that impose penalties or fees on customers for posting online reviews as well as those that require customers to give up the intellectual property rights related to such reviews. The legislation empowers the Federal Trade Commission to enforce the new law and impose penalties when necessary.

California introduced a similar version of this law which fines businesses up to $10,000 for including contract clauses that prevent customers from leaving negative reviews.

Google has released a new version of the Google quality rater guidelines, a year after the last … END_OF_DOCUMENT_TOKEN_TO_BE_REPLACED