One of the big problems with Twitter is that it isn’t very intuitive for new users to figure out.  We have seen them working on new tests, such as changing the retweet terminology to share, to help engage new users who might not be Twitter savvy yet.  Users have discovered another new test Twitter is using to help new users navigate the Twitter waters – hashtags that explain themselves. 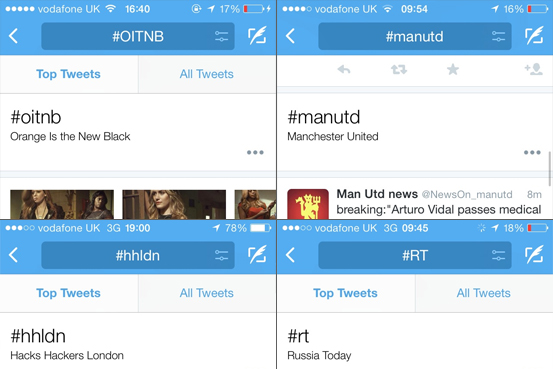 All the hashtags that seem to be associated with descriptions are popular hashtags – ones that wouldn’t likely be confused with other hashtags.  Examples seen in the wild include #OITNB, #ManUtl, #hhldn, and #rt.

This new feature would also help Twitter-savvy people who know how to use Twitter well, but just might not be familiar with the hashtags friends are using in their news feed, whether it is for an event, a television show or a news story.  Sometimes hashtags are self explanatory, but when they are turned into acronyms, they sometimes can be a bit harder to figure out.

If these go widespread, it could also work for brands in getting them a bit of extra promotion if the hashtag is expanded to show what it stands for.  But like any hashtag, it could always be hijacked and turn into a meaning the brand doesn’t necessarily want associated with them.

We finally have the first Google Quality Rater Guidelines update of 2022, and like usual, it is … END_OF_DOCUMENT_TOKEN_TO_BE_REPLACED