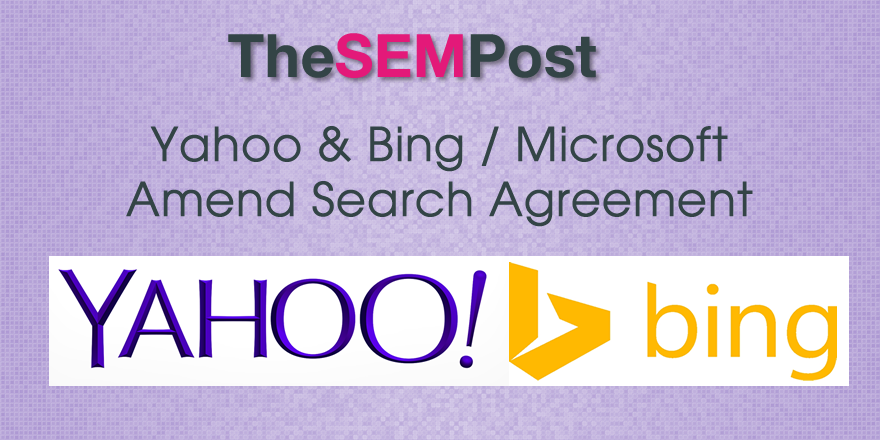 Yahoo has issued a press release stating they have amended the search partnership with Microsoft to serve Bing Search results and Bing Ads advertisements to their searchers.    They recently extended the deadline to extend the search agreement amendment period for an extra thirty days, a clue that changes to the initial agreement 5 years ago were being made, so the amendment isn’t much of a surprise.

The partnership has undergone some interesting changes, with the key bring the use of the word “majority”.

The update includes improvements in two core areas. First, Yahoo will now have increased flexibility to enhance the search experience on any platform, since the partnership is non-exclusive for both desktop and mobile. Yahoo will continue to serve Bing ads and search results for a majority of its desktop search traffic.

Second, the update increases agility and sales focus. Microsoft will become the exclusive salesforce for ads delivered by Microsoft’s Bing Ads platform, while Yahoo will continue to be the exclusive salesforce for Yahoo’s Gemini ads platform. Integrating the sales teams with those responsible for engineering will allow both companies to service advertisers more effectively. Microsoft and Yahoo plan to begin to transition managed advertiser sales responsibilities this summer.

Yahoo agrees to serve Bing ads and search results for the “majority” of desktop search traffic.

It is also unknown how this affects ad positioning if/when there are competing ads from both Yahoo and Bing or if they will not run together at all.

If there are no restrictions, it likely opens the door for Yahoo to test running their own search technology and advertisements to Yahoo searchers, when they do have working search technology.  It has been long known that Marissa Mayer wants to bring search back in-house, however they it is not known how far along the company might be in plans to be able to serve their own search results.

It also leaves open the door for Yahoo to test another competitor.   But which one would they test?

From a revenue perspective, Google would be an option, however Mayer as a former Googler could either hurt or help.  And Mayer is targeting Google in their bid to gain search market share, such as when they reached an agreement with Mozilla which saw the default search for Firefox change from Google to Yahoo late last year.

There are other search engines that would love to serve search results for Yahoo, but would any of those options be realistic for Yahoo, both from a revenue perspective as well as a search relevancy one?

Yahoo recently was also testing a version of their mobile search results with “powered by Bing” removed from the footer.  But it isn’t know if this was an oversight in a new design test or if it was indicative of something more.

So while the two have come to an agreement for this amendment, I think most would be extremely surprised if this partnership continues five years from now when the ten year agreement ends.