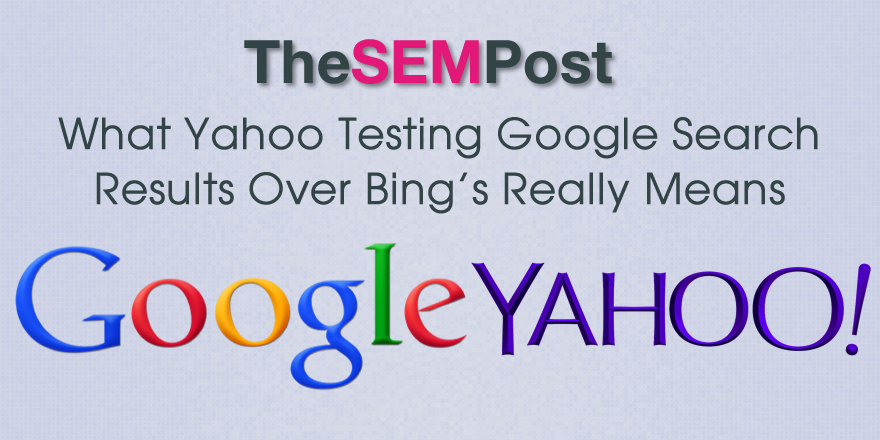 Here are some things to know about this search engine triangle, and more importantly, what it means for both advertisers and SEOs.

Aaron Wall at SEOBook was the first to spot the changes.  Here is a quick look at how they appear, first with Google results: 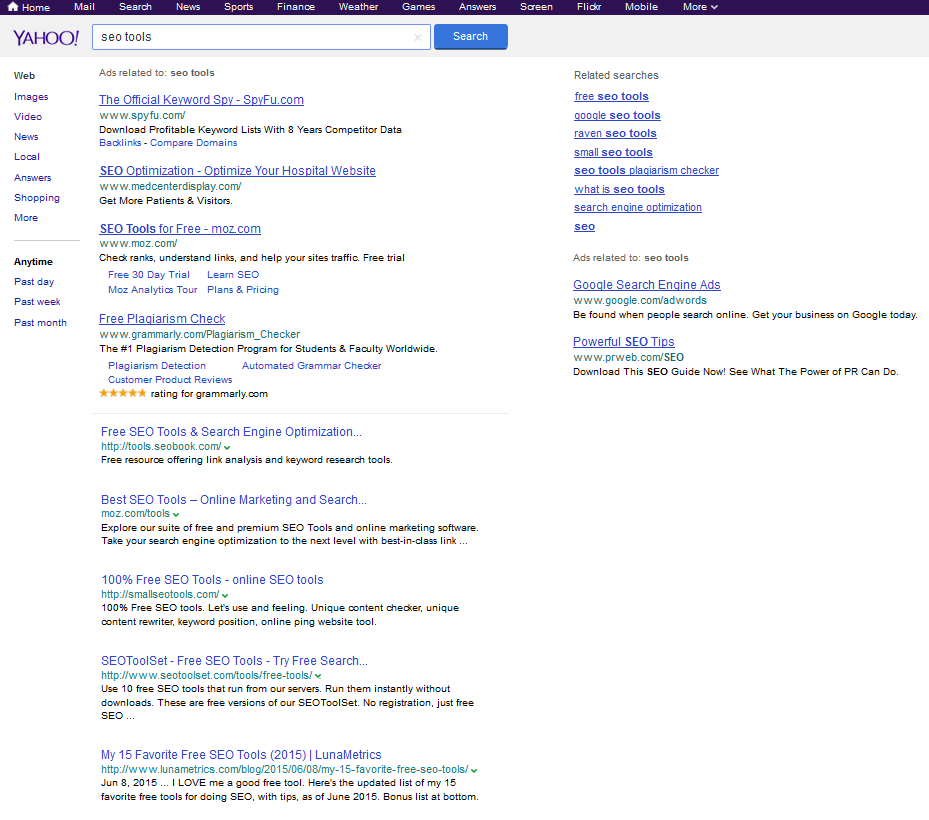 And with Bing results: 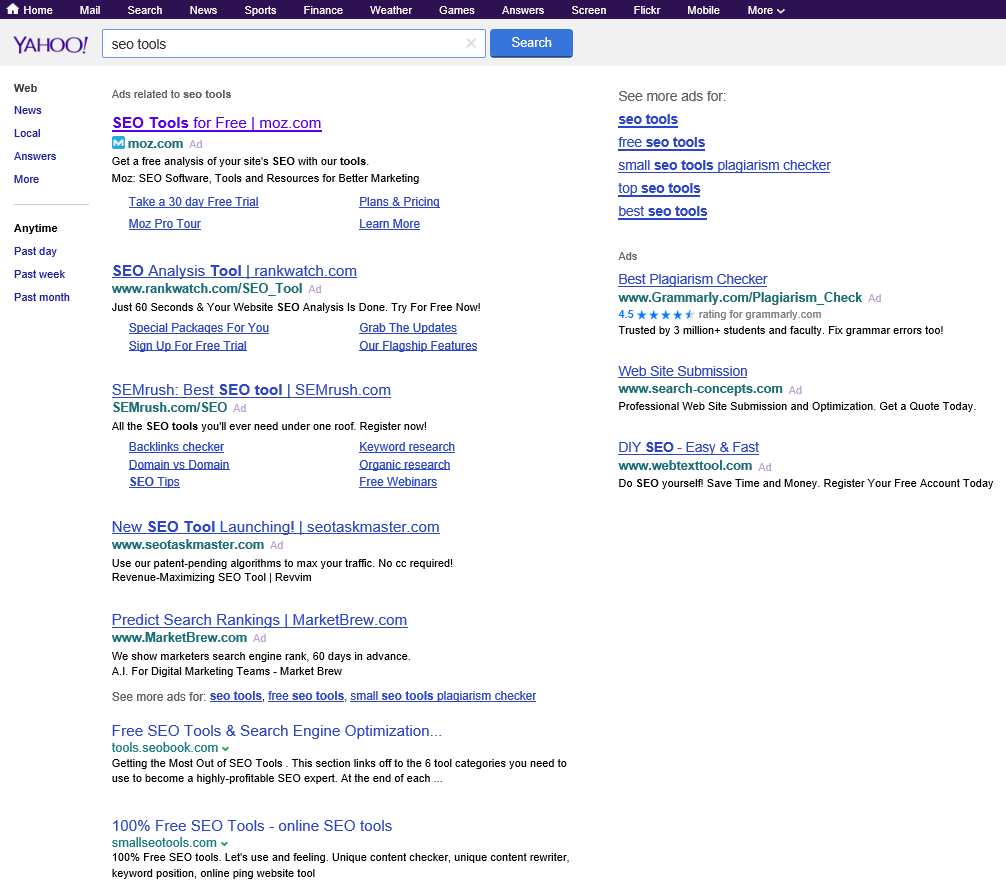 It is fairly easy to tell them apart, with Bing having the first ad with the purple title, while Google’s version is simply blue.  And the Google results do not have any of the additional verticals mixed into the results like we see with the Bing based results.   You can find more details on all the differences in a chart here.

After Yahoo and Bing rewrote their search deal, many wondered if Yahoo would test out Google.  In a sense they are larger competitors, but Yahoo and Google also have a long history together, and the Marissa Mayer connection can’t hurt when it comes right down to it.

It was also noticed in April that Yahoo was running some searches without the traditional “Powered by Bing” at the bottom, which many saw as a confirmation that a non-Bing search was going to happen.

Marissa Mayer is also in the business of pleasing the board and the shareholders, and it is widely believed there is significantly more money available with Google results and all their advertising than there is with Bing.  However, they still have that “majority” of results served from Bing in the revised search agreement to honor… but it is also an agreement that Mayer can terminate at will which definitely puts her in the driver’s seat and not Microsoft or Bing.

A Blow to Bing

It would be a definite blow to Bing if Yahoo began serving more of Google’s search results.  After all, Yahoo – which is still considered it’s own search engine for comScore reporting – is a large part of the overall search share numbers that Bing reports when talking about their search engine.  According to the latest comScore data, for May 2015, Microsoft/Bing has 20.3% of the search share while Yahoo has 12.7%.

Yahoo also has additional search agreements in place, most notably as the default search engine for Firefox, that makes a partnership with Yahoo very attractive for both Bing and Google.  Bing has made some of their own deals, including being the default search for AOL properties and the somewhat controversial Java update partnership, but with AOL having slightly over 1% search share, it isn’t enough to offset the loss of Yahoo, if the testing continues.  And Bing is the one that it will affect the most if Yahoo does transition to running Google search results beyond the initial test phase.

If Yahoo serves more of Google’s search results, it also makes things much easier for SEOs.  After all, Google is the algo that everyone chases to rank well, and Bing is usually an afterthought, unless those sites are significantly penalized in Google.  And being able to benefit from Google-based SEO in some of the Yahoo search results is a definite win for SEOs.

Technically, it is believed that Yahoo could serve Google search results – or any other search results for that matter – for up to 49.9% of searches, as their search deal with Microsoft right now states the “majority” of results will be powered by Bing, unless Mayer kills the agreement.  And it seems unlikely that Yahoo would test another player in the search engine market, although there is always the possibility that Yahoo could eventually release their own search engine, an option Marissa Mayer is exploring.

Then there is also the issue of the ads.  Bing Ads, which is known for having great targeted traffic, also suffers from lack of traffic for their advertisers, something that Yahoo using Google will compound.  And it is a problem that doesn’t look to be resolved anytime soon unless Bing is more aggressive in their own partnerships, and not be content to let Yahoo make them, on the assumption that they will get that traffic regardless.

But from Yahoo’s perspective, it is widely believed that Google ads pay partners better due to higher competition for ads being displayed, which means Yahoo makes more money which of course makes their shareholders happy.

But it will be Bing Ads’ advertisers who stand to lose out on both the cheaper clicks and the targeted traffic if Yahoo begins favoring Google results over Bing’s.

On the positive side however, most advertisers on Bing Ads are also current Google AdWords advertisers too, so they can recoup that traffic, at least how it currently stands.

But again, this would still hurt Bing Ads’ advertisers.

At the end of the day…

With this still being tested – and a seemingly limited test at that – it remains to be seen just how much impact this will have on webmasters from both the organic side of things and the pay per click side.  But it is definitely something to keep a close eye on, especially for those that advertise exclusively on Bing Ads as well as those who might be penalized in Google and rely on Bing results for organic traffic.

Added 7/2/2015: I received a response from a Google spokesperson who said, “Yahoo is currently testing search results and ads from a number of partners, including Google as one of their options.”

Google has released a brand-new Google quality rater guidelines, coming close to a year after the … END_OF_DOCUMENT_TOKEN_TO_BE_REPLACED