You are here: Home / Video Marketing / Activia Tops List of the Most Shared Social Video Brands of 2014 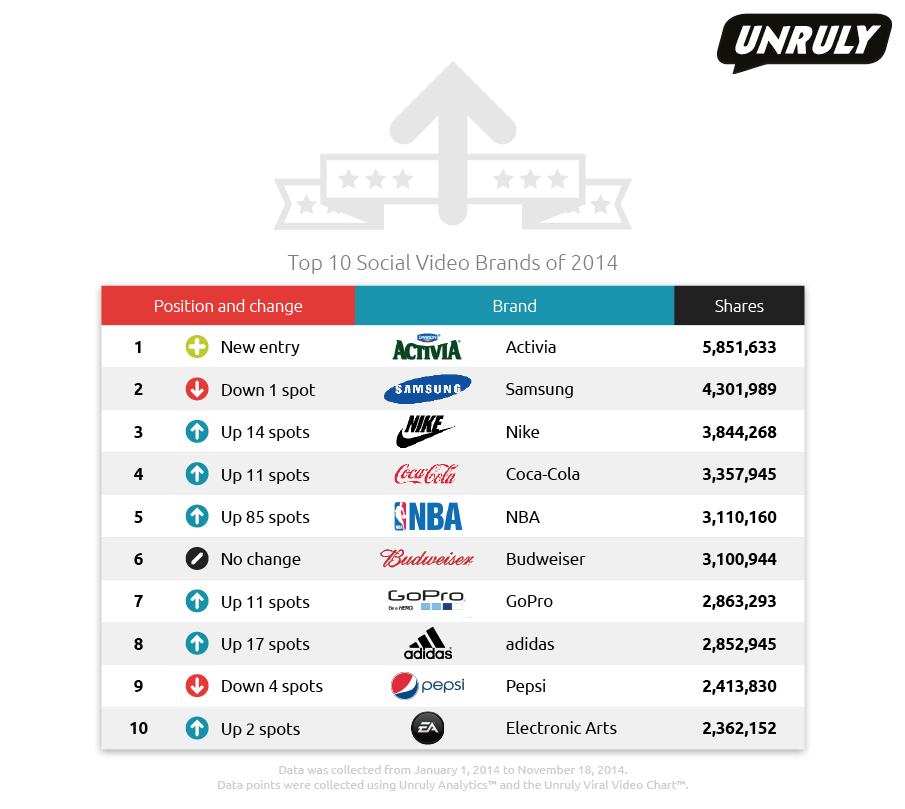 Marketing technology company Unruly has crowned Activia the number one social video brand of 2014, thanks to its record-breaking collaboration with Shakira around the World Cup. “La La La (Brazil 2014)”- the most shared ad of all time, with more 5.8 million shares worldwide – puts the Danone company ahead of last year’s winner, Samsung (4.3 million shares), and sports giant Nike (3.8 m), in third.

Each of the top three brands capitalized on the global popularity of the 2014 World Cup by launching videos during the year’s biggest sporting event. Activia launched “La La La” just prior to the month-long soccer championship in May, while Samsung launched multiple videos to coincide with the event, including #Galaxy11: The Training (538,262 shares) and #Galaxy11: The Beginning (404,348 shares).

Nike once again outperformed arch-rival and official sponsor adidas (8th) at the World Cup, with “The Last Game” (2,151,809 shares) and “Winner Stays” (1,432,957 shares) the second and third most popular ads created around the sporting spectacle.

Nicolas Frerejean, Global Marketing Director at Activia, said, “We are delighted to receive the award for the Most Shared Brand of 2014.”

He added, “The video produced with Shakira in support of the World Food Programme has received an incredible response online, and it is amazing to see the campaign at the top of the charts as the most shared branded video of all time!”

Frerejean concluded, “Achieving this is also important in our approach of brand advertising, as viral or social videos have the ability to create a strong level of viewer engagement, and an active endorsement, which is a great measure of success.”

No auto brands made into the top 10, due to a poor ad performance at this year’s Super Bowl, which saw online video shares plummet by almost a third for the first time in the event’s history. Google, which was the winner in 2012, also missed out.

Richard Kosinski, President, US Unruly, said, “In a cluttered media landscape these are the hero brands that have cut through the noise, the social brands that have invested in making a genuine connection with their consumers and are creating ads that people choose to watch and share.”

“Increasingly these brands are also tying social success to business results and aiming for valuable virality that delivers value for the bottom line as well as fame at the top of the social leaderboard.”

Unruly’s rankings are based on the number of shares – as opposed to views – across Twitter, Facebook and the blogosphere. As such, they are a measure of the ad’s online buzz or virality, ranking ads by the volume of active pass-on rather than the passive, frequently paid metric of video viewership. Data was collected from January 1, 2014 to November 18, 2014. Data points were collected using Unruly Analytics and the Unruly Viral Video Chart.