Back in June, I spoke at VidCon and said, “Traditional influencer outreach works if you’ve got breaking news or the latest Harmon Brothers video.” Well, I guess that I should be careful what I wish for. Today, I got an email from Matthew Faraci of Agility PR Solutions announcing “a brand-new Squatty Potty video campaign created by Harmon Brothers.” Now, I don’t normally write about every story that I’m pitched, but this latest Harmon Brothers-crafted campaign is the best work they’ve done since their 2015 viral sensation that put Squatty Potty on the map.

Now, in case you don’t want to Google “Squatty Potty” because you know personal history is used by both Google and Bing to influence search results, here’s be backstory: The creators of toilet stools and toilet spray bathroom products is a fast-growing family business based in Saint George, Utah which has become a worldwide sensation. Featured on Shark Tank and well-known for it’s hilarious, viral social media-driven ad campaigns, the company has sold more than 4 million products in the U.S. to date. In 2015, Harmon Brothers created a now-iconic ad for Squatty Potty called “This Unicorn Changed the Way I Poop”, earning 170 million views in social media to date.

Now, I can hear search engine marketing muttering amongst themselves, “Okay, so some funny videos go viral. What did this do for the client?” Great question. Here’s the answer: “This Unicorn Changed the Way I Poop” not only got a ton of video views, it also increased online sales of Squatty Potty by more than 600% and retail sales by over 400%. So, the creators of toilet stools have been laughing all the way to the bank.

Today, Squatty Potty launched a brand-new campaign entitled “Discover the Most Pleasurable Way to Poop” featuring new characters “Goldie Drops” The Dragon and The Merman, in the company’s most ambitious campaign to date.

Bobby Edwards, the CEO of Squatty Potty, said, “Our first Squatty Potty campaign forged new territory in advertising. We were trying something that had not been done before, and we knew it was a bold risk. That decision paid off, so much so that it’s hard to find anyone who hasn’t seen our ads. Today, we’ve elected to double-down, expanding the narrative with new characters and a new direction.” He added, “We know people are going to love it, and can’t wait to see how this new creative take an already booming business to greater and greater heights.” 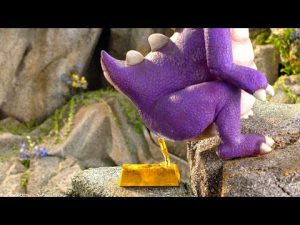 Daniel Harmon, Creative Director at Harmon Brothers, said, “In this campaign, we decided to bring back The Prince, but add new characters, new color and new jokes to introduce the Squatty Potty message to even more people. For fans, this is going to be a natural addition to the ads they already love. And for those who haven’t heard of Squatty Potty, it stands on its own, once again making a solid case for why this is such a fantastic product.”

We finally have the first Google Quality Rater Guidelines update of 2022, and like usual, it is … END_OF_DOCUMENT_TOKEN_TO_BE_REPLACED