You are here: Home / Video Marketing / Top 10 Super Bowl Ads for 2017 Depend on Which Metrics You Use 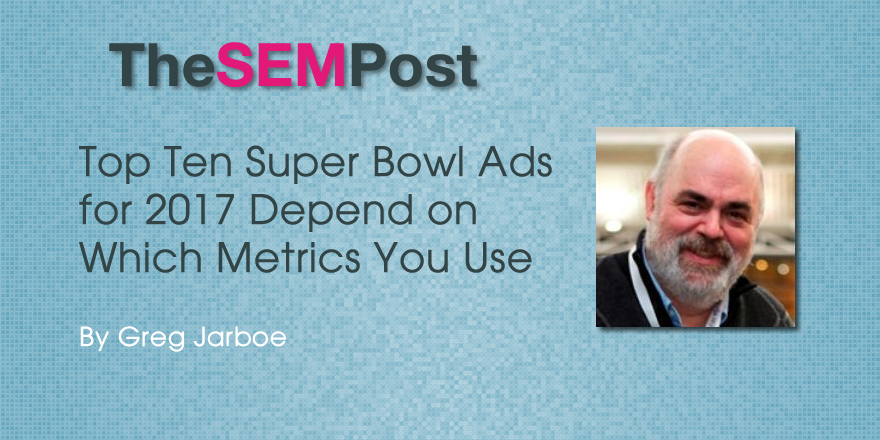 Marketers know that the New England Patriots beat the Atlanta Falcons to win Super Bowl 2017 by a score of 34 to 28 in overtime. But which Super Bowl ads won the Big Game? Well, as I observed in The SEM Post two years ago, it depends on which metrics that marketers use.

Now, some advertisers may just want to be on a list – any list – so they can receive kudos around the water cooler at work today. But, as regular readers of The SEM Post know, metrics matter. Or, as the legendary David Ogilvy said more than 30 years ago, ““I do not regard advertising as entertainment or an art form, but as a medium of information. When I write an advertisement, I don’t want you to tell me that you find it ‘creative.’ I want you to find it so interesting that you buy the product.”

So, as you scan the three lists of top 10 Super Bowl ads for 2017 below, ask yourself: “Do I find this video ad so interesting that I’d buy the product?” I know, it takes the fun out of watching them. But, at the end of the day, that what pays the rent.

The top 10 ads, as voted upon by this year’s Ad Meter panel, are:

“Each year Super Bowl commercials dominate the conversation in the media and advertising industry in the weeks leading up to the big game but also entertain consumers across the nation,” said Dave Morgan, President of USA TODAY Sports Media Group, USA TODAY NETWORK. “This year, we continued to grow our audience engagement, including an industry-first Facebook Live series. Our hosts Ron Burke, Laura Petrecca, and our panel of experts tackled everything from the intersection of advertising, sports and Hollywood, to what makes a winning commercial, in the week leading up to the game. As the hype surrounding Super Bowl commercials continues to challenge the actual game for attention, we expect to further grow our Ad Meter platform and define exactly what it means to successfully advertise in the modern, digital age.”

Budweiser’s “#BornTheHardWay” is the most shared ad of the 2017 Super Bowl, according to data released today by video ad tech company Unruly.

The beer brand’s 60-second commercial, which tells the story of its founder Adolphus Busch’s harrowing journey from Germany to America and his fateful meeting with fellow immigrant Eberhard Anheuser, has attracted a total of 435,892 shares across social media, ahead of Mr Clean’s second-placed “Cleaner of Your Dreams” (226,767).
It’s the fourth time Budweiser’s has topped the list of the most shared Super Bowl ads in the past five years.

However, despite a number of brands releasing their ads early online, this year has seen a significant decrease in sharing activity from the previous year. The top 10 ads have so far generated 1,456,023 shares online altogether – half of what the top 10 managed at the same time last year (2,889,156), and way behind 2015’s record-breaking total (4,485,297).

In third spot is Airbnb’s “We Accept”, a campaign which calls for social inclusion which has attracted 155,971 shares online since its launch yesterday, followed by T-Mobile’s “#UnlimitedMoves”, starring Justin Bieber, in fourth (155,070). Audi’s “#DriveProgress”, which tackles the issue of equal pay, was fifth (132,606).

Other ads to appear in this year’s top 10 include Avocados from Mexico’s funny commercial “#AvoSecrets” (sixth), Hyundai’s “A Better Super Bowl” (ninth), which includes footage filmed during the Super Bowl itself, the extended version of 84 Lumber’s controversial campaign, “The Entire Journey”, and Coca-Cola’s “It’s Beautiful” (eighth), a rerun of an ad originally screened during the 2014 Super Bowl. Tide’s “Gronk Kinda Gets It Out” was the only teaser to make it onto the list, coming in tenth.

Devra Prywes, SVP, Marketing and Insights, Unruly, said: “For the fourth time in five years, Budweiser took home the most shared spot at this year’s Super Bowl. Budweiser topped the chart by sharing its emotional origin story – one of immigrants’ hard work and determination.

“Socially conscious videos make up half of the top ads list, from 84 Lumber’s server-crashing, overtly political spot to AirBnB’s message of acceptance to Audi’s #driveprogress message. Coca-cola re-released an existing ad because it ties so well into the cultural zeitgeist.”

Unruly’s Super Bowl Top 10 ranks Facebook and YouTube videos by the number of shares they attract on Facebook and the blogosphere as opposed to the number of views. As such, it’s a true measure of a brand’s viral success, ranking branded content by the volume of active pass-on rather than the more passive metric of video consumption (views). Stats were compiled on February 6, 2017. Chart does not include movie trailers.

Big Game ads are still in play on YouTube

The confetti has hit the field. We all went Gaga. The Pats have come out victorious.

While you may not have seen that coming, YouTube has seen its highest ever watch time during the game, with more than 350,000 hours spent watching big game ads, marking over 15% year-over year-growth. If your Game Day party was anything like theirs, mobile also played a huge role – 70% of this watch time came from mobile devices. And this is just the beginning.

Historically, the day after the Big Game kicks off several weeks of watching and re-watching Big Game ads so make sure you check out the tenth anniversary of the YouTube AdBlitz channel and vote for your favorite by February 10 at midnight PT.

YouTube is already starting to see some early favorites. Some with a fresh take on iconic characters, others that introduced new heroes. But the undeniable theme of the night was ads that connected to social and political topics — in fact, these ads accounted for nearly half of the watch time on Game Day.

Interest in commercials didn’t stop at YouTube either. Of the top trending Google Search questions during the game, three were about the ads:

The Big Game may have been called, but the battle for top ad is still in play. So, check back next week to find out this year’s winner of YouTube AdBlitz.

We finally have the first Google Quality Rater Guidelines update of 2022, and like usual, it is … END_OF_DOCUMENT_TOKEN_TO_BE_REPLACED