You are here: Home / Google / France Wants to Ban Linking to Any Site Without Permission 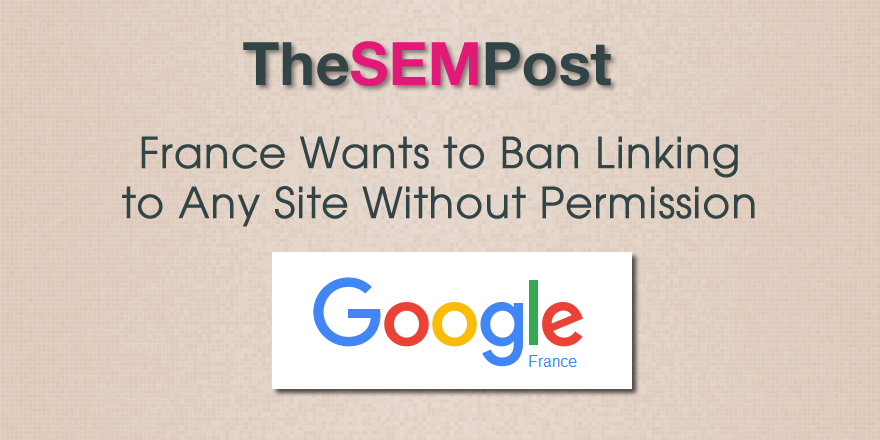 If you want to link to a website in France, you would need to get explicit permission from the rights holder”, if two Parliament Members in France are successful in their proposal amendment.

The idea was proposed but rejected by the Legislative Commission, but it is brought back again. Socialist Karine Berger and Valérie Rabault once again tabled their Amendment #843 to Axelle Lemaire’s Bill for a Digital Republic, which would actually prohibit by default a large quantity of hyperlinks in France.

This device aims at amending the Law for Confidence in the Digital Economy and hold ISP and hosts criminally responsible as soon as they “allow public access to works or objects protected by the copyright code, including through automated means.”

The amendment states “users are required to obtain authorization from concerned rights holders”. The two MPs demand that “such authorization covers actions by users of such services when transmitting to the said users the protected works or objects, in order to allow use as stated in the fist paragraph inasmuch as such users are not acting on professional purposes”.

It does seem that it is another attack on Google, since they reference Google’s linking practices specifically.

“Just look at Google’s referencing procedures:  they are based on hyperlinks, and links that lead to copyright-protected works on their publishing site are precisely what allows Google to create any added value whatsoever”, said MP Karine Berger in her plea for the amendment.

“In other words, some commercial Internet operators benefit from the value of some copyright-protected cultural goods and services without ever paying for using them. The amendment, by raising the question as to whom is responsible for collecting value through hyperlinks, aims at overturning jurisprudence of the Court of Justice of the European Union. It is a paramount legal and economic issue.”

Similar to efforts in Germany, Spain and even the European Parliament, very, very shortsighted Google haters think that a way to “punish” Google is to make it pay money to sites that it links to (mainly when it comes to news aggregation). The two French politicians admit flat out that they’re trying to help copyright maximalists.

But many site owners depend on traffic from Google that are outside of the realm of news.  It doesn’t seem to make any difference on the type of website, meaning it could prevent someone blogging from linking to a site they are a fan of or even product they like – something retailers would not be happy about.

France has been in the news more than once due to the way they want to govern the internet.  They pushed for Google to remove all Right to be Forgotten removed results from all versions of Google, not just the EU versions.   And France is also the country that wanted to force Google to reveal their entire search algorithm and to put 3 competitors, including a France-based competitor, on their homepage.

We finally have the first Google Quality Rater Guidelines update of 2022, and like usual, it is … END_OF_DOCUMENT_TOKEN_TO_BE_REPLACED