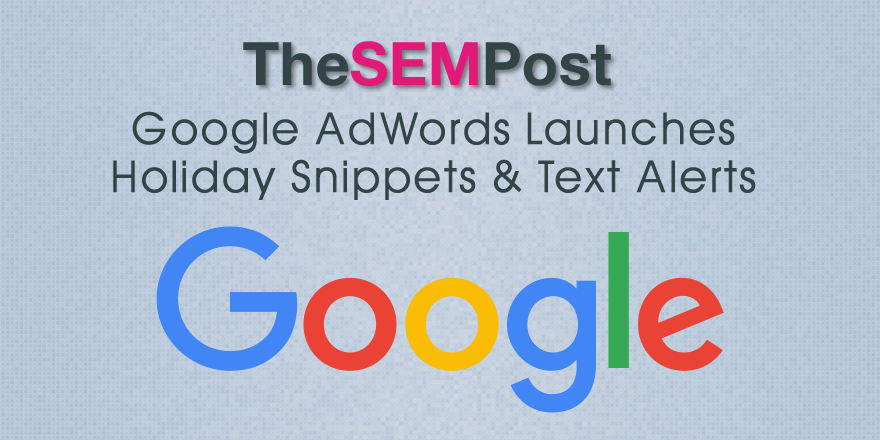 Last week Google started letting business owners set holiday hours and this week the presents continue but this time in the AdWords sphere.  On Tuesday they announced on their Google+ Page that people can subscribe to receive via SMS promotions related to Black Friday, Cyber Monday and general Holiday deals.

Clearly this is a test of function and will be made available via AdWords in the near future allowing advertisers to push offers out via SMS as an AdWords function.  The user experience will look something like: 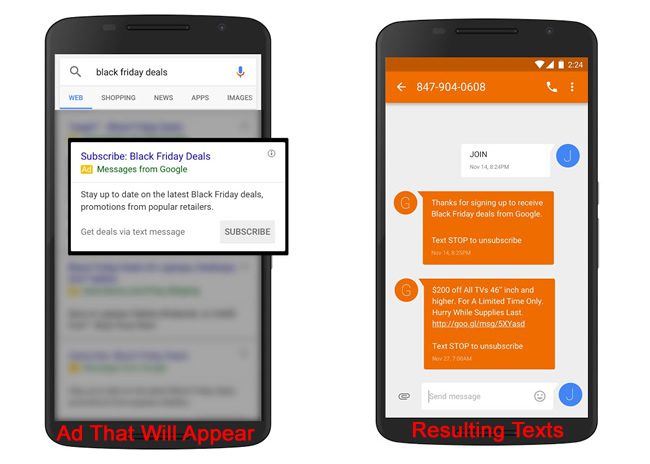 While this is not currently available for advertisers you’ll want to keep your eyes open as it’s likely to be added soon.  In the meantime you can test the user experience later this month by texting “JOIN” to one of the following numbers:

And Some Holiday Snippets

One might now note, “But that was 2 days ago … what has Google done for me lately?”  Well if you’re an AdWords advertiser they’ve just added two additional headers just for the holidays.  The new headers are:

You’ll find these new headers with the other structured snippets tucked away at the bottom of the list. 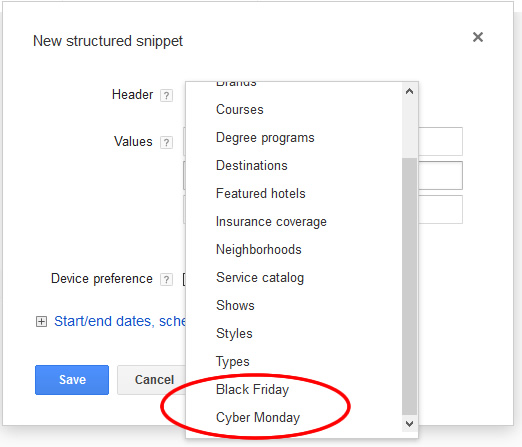 Obviously anything that can attract the eye and entice buyers in this incredibly competitive time is crucial and e-tailers will want to take advantage of this and get it setup before the 20th.  I also have a sneaking suspicion that the snippets and the texts will eventually be tied together in some or many ways and so getting a jump on understanding how Google will be tying promotions to events prior to any launch of an SMS service will give you an advantage when it is rolled out.

For example, while you will likely be able to control your own SMS list Google is bound to have global lists for major events where users can sign up to receive a myriad of offers from a variety of companies.  Where will they draw this from?  If we sign up for the Black Friday messages above, where will they pull the deals from?

I’m certain that during this test they have their own list of trusted providers but the long term goal must be to push out deals from advertisers who perform well and who they know are tied to the event the SMS list is targeting.  And a very likely source for said data will be right here … in the snippets.

We finally have the first Google Quality Rater Guidelines update of 2022, and like usual, it is … END_OF_DOCUMENT_TOKEN_TO_BE_REPLACED