You are here: Home / Google / Your New Advantage on Mobile Search 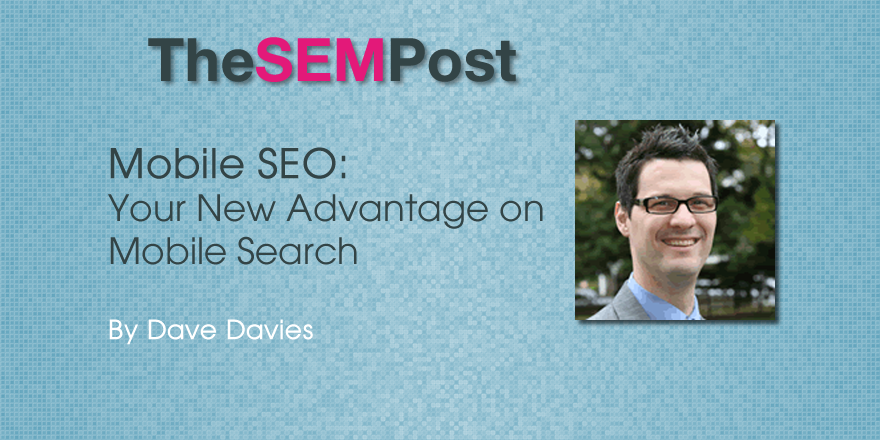 If you haven’t been hiding in a cave for the past few months you’ll know that April 21st marked the beginning of the rollout of a mobile index by Google. Essentially, instead of creating a mobile algorithm to favor mobile sites they decided to create a whole new index of sites that are mobile-friendly to give them an advantage over sites not in this index for queries made from mobile devices. I won’t dwell any further on what it is, you likely know and if you don’t there’s a great article by Jennifer Slegg here that covers it well. What I want to cover is an advantage that this gives website owners who know what’s coming in the short-to-mid-range future.

Before we jump straight to that let’s lay a little groundwork. Don’t worry, it won’t take long and will make the advantages and to-dos make more sense. So let’s begin with …

Google evolves with the times and similar to anti-virus programs being pushed to improve by virus writers search engines have to give some credit to SEOs and even the black hats for forcing them to be better than they once were. And so they evolved but as they were forced to be better, so too were SEOs and website owners. No longer could you throw up a site, stuff it with keywords, tweak some keyword tags (that’s right … keyword tags) and exchange links with a few unrelated sites and get rankings. Both sides evolved.

But what would happen if we went back to the web of 2000 with today’s Google Algorithm? The answer: horrible results. Of course there would still be a top ten but it would consist of sites that had little resemblance to what users wanted for two reasons:

Poor sites with SSL certificates would get a boost, plain and boring sites would win over slow loading robust sites as PageSpeed factored in, etc. It would be chaotic and it wouldn’t work.

So what does this have to do with your advantage in mobile now? Good question. With the groundwork laid let’s move on to …

Your Advantage on Mobile Search

What we are seeing right now is the birth of a new index and this comes with pros-and-cons. The cons exist if you don’t know what this means. The pros are for anyone who does.

What we’ve seen over the past few months is a race for mobile. Developers, SEOs, Designers and DIY website owners were all racing to get their sites “Mobile-friendly” so Google wouldn’t relegate them to the depths of the mobile results. Think for a second what this means: most designers and developers were working on the same task. Were they all equally skilled? Do they all build great websites? The answer to both of these is obviously “no”. But are the mobile-friendly? Mostly. So it’s a level playing field. For now.

-friendly sites. And so this will seem like a victory for any who had their sites converted and it is. But again … for now. While the current action is the deployment of a new index there will be specific algorithms designed around it and as we have discussed previously, algorithms evolve and this one will too.

Until now mobile sites have competed with non-mobile sites for rankings. Google has been clear that mobile is important for years but this put the nail in the coffin of non-mobile sites. But do you suppose that’s where it’ll end? Of course not. This is where the pros come in for those who can see the writing on the wall of what will undoubtedly become an ever evolving mobile algorithm.

Now that the non-mobile sites are out of the index (exceptions like news sites notwithstanding) the battleground is set. It’s now a battle among mobile sites and as that war is waged and as Google continues to evolve; how long do you suppose it will be before they start looking more-and-more to crediting the best-of-the-best rather than a simple mobile-vs-non-mobile filtering? Not long if it hasn’t begun already.

And so it is the website owners who focus now on making sure their mobile sites are actually optimized for mobile who will win. Loading a massive desktop-sized slider image to a phone isn’t optimized if all it does is resize – you need to be loading different images. “Simple” things like that will give website owners a huge advantage.

The War for Mobile Is Not Over … It Has Just Begun

With this information it’s extremely important to not now simply rest on your “Mobile-friendly” site any more than simply creating a website for desktop was the time to simply call it a day and wait for the traffic. Now is the time to make sure that mobile site is all it can be, review your analytics from the pure mobile context and see how those visitors are experiencing your site. Run the PageSpeed tools over your site and look to the differences being reported in your Mobile vs Desktop results to see the areas Google is concerned about on mobile devices and address them (and obviously the desktop issues while you’re at it though they tend to be addressed with the mobile).

And remember, you’re now thinking about it but your competitors who aren’t reading The SEM Post are likely not. They may have had their sites converted by lackluster developers or just developers in a rush to deploy a solution. If they don’t push for what Google is right now telling us they want (and most of them won’t) then this is your time to take those victories.

So get out your coffee, push up your glasses and get to it.

We finally have the first Google Quality Rater Guidelines update of 2022, and like usual, it is … END_OF_DOCUMENT_TOKEN_TO_BE_REPLACED