You are here: Home / YouTube / Half of the Most Shared Olympics Ads of All Time Are From the Rio Games 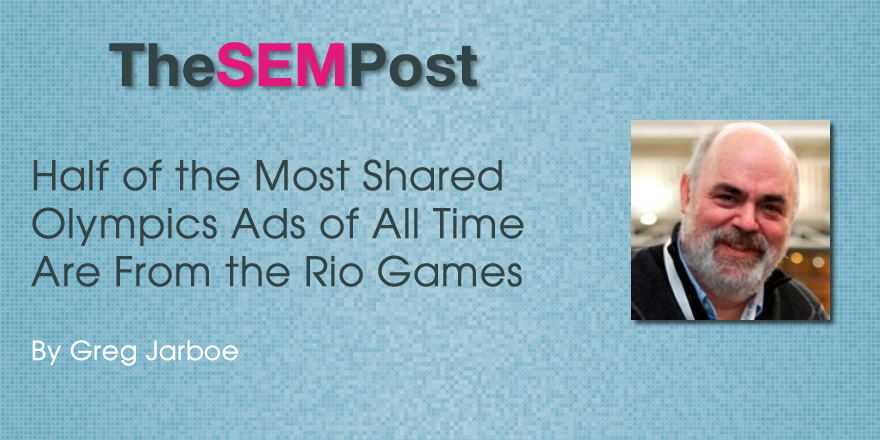 Half of the top 10 most shared Olympic ads of all time come from the Rio Games. That’s according to data released this week by Unruly, which puts ads from British broadcaster Channel 4, Under Armour, Nike, and P&G in the all-time chart.

Channel 4’s “We’re The Superhumans” is the most shared ad of the Rio Olympics. The ad promoting the TV channel’s coverage of the upcoming Paralympic Games took gold after being shared more than 1.46 million times across social media.

The most shared ad of all time remains P&G’s 2012 ad “Best Job,” which was created for the 2012 London Olympics and still leads the way with more than 2.44 million shares. But with the 2016 Rio Paralympics not due to start till next month, the “We’re The Superhumans” spot – which is currently in second place – still has time to claim the all-time gold.

The latest installment from P&G’s highly-successful “Thank You, Mom” campaign – “Thank You, Mom – Strong” – not only took bronze in Rio but was also sixth in the all-time chart – the third ad from P&G to make the list.

Meanwhile, Nike’s decision to release several different ads as opposed to one blockbuster ad also meant the sports giant had three ads in this year’s top 10 – the most by any brand. Spots from United, Gatorade and the BBC also made the Rio top 10.

Top 10 most shared Olympic ads of all time

Unruly has also released data this week which shows how the average Olympic ad compares with the rest of Adland.

Using analysis taken from Unruly Pulse – an analytics tool which provides insight into the emotional trends of video advertising – the video ad tech company found that Olympic ads are almost twice as likely to make viewers feel inspired and almost three times as likely to make people feel proud than the average ad (93% and 166% respectively).

These are strategic insights for brands and agencies that are preparing to run ads during the 2016 World Series, 2017 Super Bowl, or the 2018 FIFA World Cup as well as the 2018 Winter Olympics in Pyeongchang, South Korea, or the 2020 Summer Olympics in Tokyo, Japan.

We finally have the first Google Quality Rater Guidelines update of 2022, and like usual, it is … END_OF_DOCUMENT_TOKEN_TO_BE_REPLACED