You are here: Home / Google / Dear SEO Industry: Haters Don’t HAVE to Hate

Last Friday, Bill Hartzer’s SEO agency, Globe Runner, announced that Matt Cutts had joined their already notable team as Director of Search. Those of us that have followed Matt for years in his position as head of Google’s Web Spam team can appreciate how much value that could add to any agency’s offering.

Bill and his team have always been good at helping their clients color between the lines, but having someone of Matt’s character, with his ability to clearly define those ever-changing lines, could add even more value to Globe Runner’s services.

It’s a little sad, I think, that one of my first thoughts, upon finishing my read of their announcement, was one of concern that the write-up included Matt’s new company email. How many haters, I wondered, would seize the opportunity to heap abuse on Matt because of some imagined past slight?

For my part, I took advantage of the opportunity to send Matt an email of congratulations and best wishes. In doing so, I became one of those that fell for Bill’s nicely crafted, albeit early, April Fool’s gag. In fact, I’m sure that running it a few days early, with an April 1st “effective date” of Matt joining the team, was part of what made it more effective, even though it seemed to aggravate a few people,.

In my own defense, I’ll say that I did consider the possibility of it being a gag post, but between the intricacy of the gag and my incorrect perception of Bill as not being an April Fool’s kinda guy, I decided it was valid. Got me!

And apparently, at least a few others were taken in, too, according to Matt: 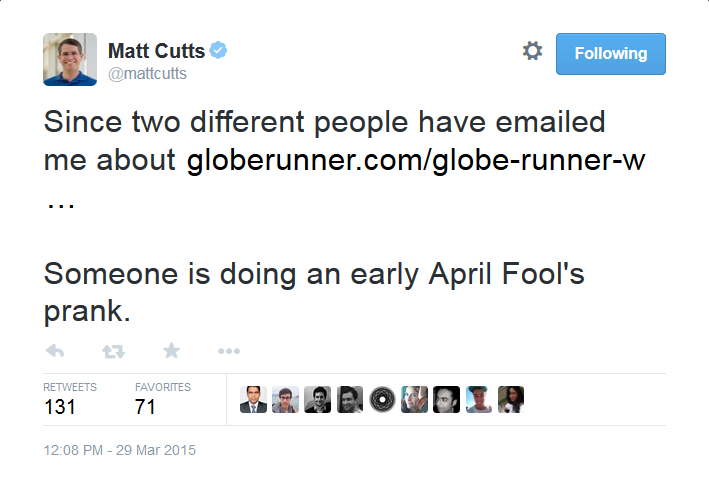 From some of the comments in his stream and elsewhere, it seems some folks have little sense of humor, at least when someone outsmarts them. I say ‘Bravo! Well-played, sir!’ to Bill.’

But back to the real reason I’m writing this.

Why should this even be a concern?

I refer to my concern as sad because it’s disturbing that such a thing even is a concern. But I imagine it’s a thought that would have crossed Matt’s and Bill’s minds, too, had the announcement been valid. A publicly published email to Matt would undoubtedly be tempting to some people.

As the saying goes, haters gonna hate. In fact, at least one troll appeared in Globe Runner’s post comments, taking cheap shots at Matt. Had the joke not been run until the 1st of April, I doubt that he or I (or many others) would have been so easily taken in.

So to that troll, and to any other folks that may have been tempted to take advantage of an opportunity to send Matt a nasty-gram, I offer these thoughts… if you think you have reason to hate Matt, consider this –

If your own or a client’s site was penalized at some point, I would say it’s for one of 3 reasons:

The fact is that in all three of those circumstances, directing your displeasure at Matt would be either an act of denial or evidence of unrealistic expectations. (And since those of us that sell our services as SEOs always ensure that realistic expectations are part of our service (right?)… well, it would be more than a little ironic to tell our clients that although we’ll do all we can, we can’t “guarantee” the result, yet expect more from Google, wouldn’t it?)

The other point I’d make is that Matt was, for all intents and purposes, Google’s “spokesman” to us. But he wasn’t “Google”. In fact, he didn’t actually make most of the decisions that affected us as practitioners or site owners. He was just the messenger. And to those that were paying attention, he delivered those messages very well… and usually, with plenty of advance warning (3 times in 18 months, about the abusive use of guest blogging, for instance).

So my advice would be, if you fall under #1 or #2 above, get your shit together. It’s going to get harder, not easier. And if you fall under #3, then all I can offer is “suck it up” and clean up your act a bit more, so you don’t fall so close to the edge. Make the probabilities work for you.

One thing’s certain… if you waste your time and energy laying the blame on someone else for your problems, you’re moving away from improvement, rather than closer.

Before any comments appear, accusing me of being a Google fanboy or a suck-up, I’d remind everyone that one of my own sites received a manual penalty almost exactly a year ago. While it was more harsh than I felt was justified, it only took about 4 days to get the penalty revoked, and I moved on, smarter for the experience. Believe me, that didn’t make me a fanboy. And sucking up just ain’t my style.

Google has released a new version of the Google quality rater guidelines, a year after the last … END_OF_DOCUMENT_TOKEN_TO_BE_REPLACED