You are here: Home / SEO / Just Another Pothole in an SEO Client Relationship 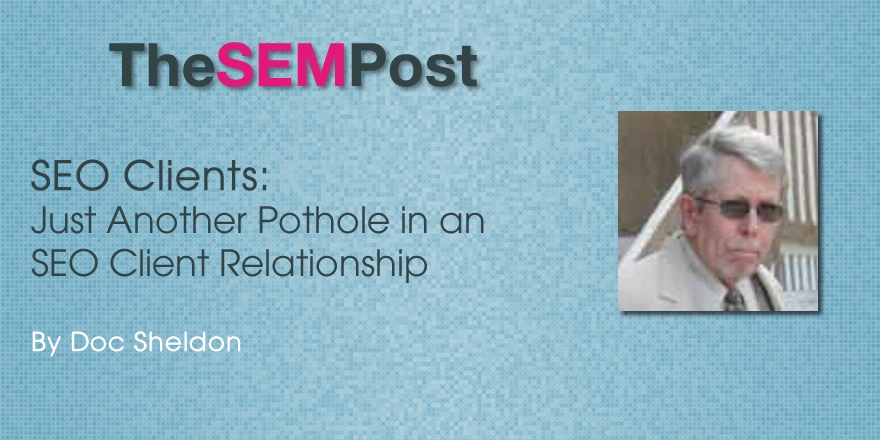 As consultants, most of us have faced situations where a client decides to not follow our advice. It’s frustrating and disheartening and can often contribute to the deterioration of the relationship. If it does, guess what?

A consultant is just someone that offers advice. We’ve all received advice that we chose not to follow… why would we expect our clients to be different? When they hire us, they’re seeking our expertise in how to best achieve some goal – that doesn’t mean they’re abdicating the leadership of their company to us. 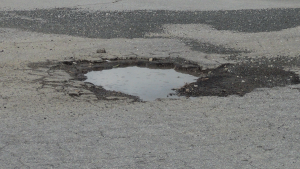 So here’s a piece of advice: Get over it! It’s not about you! It’s just another pothole.

If your client, for whatever reason, decides to pursue a different path than you advise, it’s about them. It’s their choice, and their reasons may well be a mystery to you. They may be being directed by someone higher up in their company’s food chain and just don’t feel like sharing that with you. They may have bought into a conflicting opinion on some marketing blog, or maybe they’re convinced that a tactic that worked wonders for them in a 1997 off-line campaign is the perfect solution for their issue today. Whether you think their action is appropriate or not doesn’t matter… only what they think. No matter how close your relationship with the client may be, you’re still on the outside.

Common sense dictates that you should never respond when you’re angry… you should cool down, carefully prepare a thoughtful argument and present it in a manner most likely to receive due consideration.

Unfortunately, anger/frustration and common sense are like oil and water… they don’t often exist in the same space. So we need to form a habit of always thinking through our responses to avoid making a bad situation even worse.

We all know that responding emotionally can often damage our cause. Even points that are well-stated may not be really heard, simply because of the voice we present them in. The other party will become more interested in justifying their position than in understanding ours.

On the other hand, if we present our argument in a non-confrontational manner, based on fact and logic, there’s a much better chance of getting them to at least consider our case. At that point, they can make an informed decision. And isn’t that really what our job is all about? Ensuring our client is well informed as to the risks/rewards of every action?

It’s not about you, so don’t take it personally. It’s not an attack on your competence or credibility and it’s not the client saying they know better than you. It’s simply a matter of it being their decision to make.

Unfortunately, sometimes we need to protect ourselves by documenting the fact that we advised against something. This can be touchy and how we handle it will depend upon our relationship with the individual we’re addressing, their position in the decision-making process, the stability of that position and the potential outcomes of the decision.

If your documenting email makes it sound like you’re building a case to lay the blame on someone if/when things go sour, you’ll almost certainly alienate at least one player, possibly more. And don’t fool yourself… someone on the inside is in a much better position to make things look like your fault.

On the other hand, putting your objections in strong terms may give them the ammunition they need to get their boss to listen to reason. So talk to them about it. Ask them if a strongly-worded letter of concern would help them out. If they decline, then a milder version may be in order, directed only to them. It’s at least something to have in your files… just don’t assume that you’ll ever get an opportunity to share it with anyone.

So you’ve offered your counsel, you’ve been overridden and you’ve covered your butt… what’s next?

As a professional, do you really need to ask? You go on about your business, trying to guide them down the right path. Some energy spent contingency planning would be a good idea, too, though. At least then, when things go south, you can be Johnny-on-the-spot, putting your damage control plan in play to protect their interests. And always, ALWAYS resist the temptation of voicing an “I told you so”, no matter how justified you may feel. Believe me, they’ll most likely realize it on their own and it’ll carry a lot more weight if they think of it on their own.

When you stop agonizing over every instance of a client not heeding your advice, you’ll find yourself presenting your advice in a more comprehensive fashion, leaving less room for misinterpretation or conflicting opinions. Anticipate and prepare… you and your clients will be happier for it.

We finally have the first Google Quality Rater Guidelines update of 2022, and like usual, it is … END_OF_DOCUMENT_TOKEN_TO_BE_REPLACED