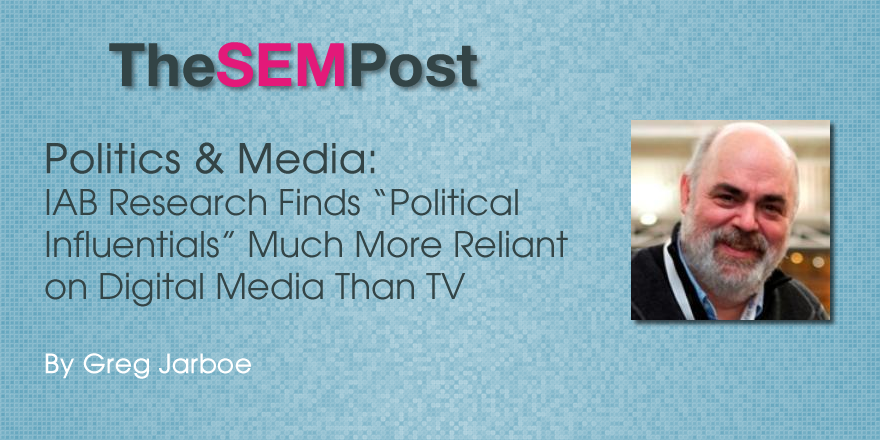 According to a new research study from the Interactive Advertising Bureau (IAB), digital media has reached parity with TV as a primary information source about presidential candidates. Both digital and TV are used by 61 percent registered U.S. voters, according to “The Race for the White House 2016: Registered Voters and Media and Information During the Primaries.” In addition, 67 percent of voters use digital information sources, which is close to the 69 percent who use TV to follow political issues.

The findings demonstrate that digital is a critical medium for reaching U.S. voters during the caucuses and primaries, with three-quarters of those who have seen a candidate’s online or mobile ad taking action afterwards, such as searching for more information about the candidate or starting an in-person conversation about them.

Delving deeper into the results, the study reveals that certain demographic groups are more reliant on mobile for political news and views than others, particularly U.S. Hispanics and African-Americans. The report shows that 67 percent of Hispanic voters and 60 percent of African-American voters visit political sites on a mobile device as opposed to 49 percent of voters overall. In addition, Hispanic voters are significantly more likely to take an action after viewing a digital or mobile ad for a candidate, with 87 percent of them saying they have done so.

Making the case even stronger for the importance of digital media in the current election cycle, registered voters who are more heavily involved in politics and public affairs, which the study calls “Political Influentials”, are particularly dependent on digital media for their political information (78 percent for digital vs. 63 percent for TV).

The report also shows that social media plays a key role in the political process, with 28 percent of registered voters saying they get information on candidates via social platforms. Other social media findings include:

“The results of the study demonstrate the vital role of digital media in the political process and substantiate that digital is on par with TV among registered voters as a key resource,” said Sherrill Mane, IAB’s Senior Vice President of Research, Analytics, and Measurement, in a press release. “As the election season heats up, it is abundantly clear that candidates and advocacy groups must harness the informational and relationship-building power of digital media to succeed.”

“U.S. Hispanic and African-American voters are crucial to candidates, and this research shows that mobile is the best way to reach them,” said Anna Bager, IAB’s Senior Vice President and General Manager, Mobile and Video, in the release.

“The Race for the White House 2016: Registered Voters and Media and Information During the Primaries” was released this week during the 2016 IAB Annual Leadership Meeting at the JW Marriott Desert Springs Resort and Spa in Palm Desert, CA.

Methodology
The IAB commissioned Vision Critical to conduct this online study with 18+ U.S. registered voters in November 2015. The total sample of 1,513 is nationally representative of this registered voter population by age, gender, race, and ethnicity. Additional Hispanic registered voters were sampled to ensure statistical robustness in analyzing this important group of voters.

We finally have the first Google Quality Rater Guidelines update of 2022, and like usual, it is … END_OF_DOCUMENT_TOKEN_TO_BE_REPLACED