You are here: Home / State of the Industry / Isn’t it Time We Start a Digital Consultant Code of Ethics?

About a week ago, my partner and I did a Hangout On Air with Jim Hedger, regarding this thought-provoking article on The SEM Post. The article prompted a lot of renewed discussion about the reputation of the SEO industry, best practices and ethics and even touched upon certification.

There have been several efforts to generate support for the idea of certification for SEO practitioners, but all have been met with indifference or outright resistance. At one point, in seemed that SEMPO might have had a chance to muster enough support for the idea, but that non-profit organization became so costly that it was economically exclusive to many independents. They missed the boat, and as a result, the path going forward has even more obstacles.

Many SEOs are rightfully indignant at the notion of others dictating how they should ply their trade. Every market, every client and every situation is different, so the tactics and acceptable risk will vary widely. And many of us are in business for ourselves because of our independent spirits.

In my opinion, though, what it really boils down to is a question of business ethics… not so much SEO-specific ethics (the existence of white and black hat SEO practices is a myth – there are no hats). The ethics question comes into play in the way we handle our clients, not their websites.

So accepting for the moment that an agreement on best practices or certification is, at best, in the distant future, let’s think about a Code of Ethics. What might such a Code address? 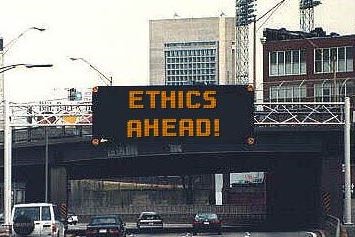 We can leave SEO and marketing out of it, in fact… this code of ethics could serve any consultant in any field. It would simply deal with basic issues like honesty, integrity, trust and responsibility, like most published codes. It would involve such things as conflicts of interest, transparency, fiscal responsibility – essentially, the basic tenets of professionalism that any consultant or agency should already be practicing, regardless of their field.

It can’t address any specific best practices, because (a) best practices vary by niche and situation and (b) we in the industry often can’t seem to agree on the time of day. But voluntary commitment to a standard of professionalism could make it much easier for clients to select a consultant… and evaluate the quality of their service. Hopefully, that will gradually force the craphats to either find a new trade or clean up their acts.

Today, there exist many questions for clients that aren’t intimately familiar with the current state of the industry (and really, how many are?). Is keyword density important? Should we list ourselves on as many directories as possible? Should we buy links? Amazingly, perhaps, to those of us that stay abreast of the evolution of SEO, the vast majority of site owners live outside our bubble, and often have no idea that such questions shouldn’t even be asked.

And sadly, with the barrier to entry nearly non-existent, many so-called SEOs either have no idea, or just don’t care, as long as they get their invoice paid.

Hence, the primary topic of Jim Hedger’s article… our name is MUD, due to unscrupulous treatment, negligence and occasional malfeasance of some self-proclaimed experts, ninjas and gurus. His point, which I wholeheartedly agree with, is that it’s long past time to do something about it. If we can’t undo the damage immediately, we can at least stop the bleeding!

So I propose that we put our heads together and come up with a credible organization that can:

Imagine that site owner Jonathan Q. Innocent is considering hiring a consultant, and the We-R-Wondrous Agency claims to be a member, adhering to their published Code of Ethics. Jonathan visits the organization’s website and requests validation of WRW’s status. It is immediately confirmed to him that WRW is a member in good standing, with zero complaints.

What would it mean?

Does this mean that WRW is the most qualified to serve J.Q. Innocent’s needs? Of course not! It simply means that WRW has pledged to uphold certain standards of professionalism.

If WRW fails to live up to that pledge, will the CEO be horse-whipped or run out of town on a rail? Nope. But if Jonathan files a complaint with the organization, they’ll ask WRW about it, and if it’s evident that they didn’t live up to their word, then perhaps their standing in the organization might be affected.

There are a lot of details to be hammered out when trying to set something like this up. And in my opinion, it’s not likely to be widely accepted, unless a lot of people have an opportunity to offer their input. Crowd-sourcing is probably the best way to approach it.

I think it’s time to bring a lot of people together and exchange ideas, so I’m contacting a number of widely respected professionals in the SEO and marketing industries. I’m soliciting their support in an effort to reach a consensus on how such an organization should be structured and managed, what its goals should be and how to give everyone a voice.

I expect we’ll be announcing the first steps before long… we’ll likely start with some hangouts for a crowd-sourcing free-for-all. Hope to see you all there.

We finally have the first Google Quality Rater Guidelines update of 2022, and like usual, it is … END_OF_DOCUMENT_TOKEN_TO_BE_REPLACED