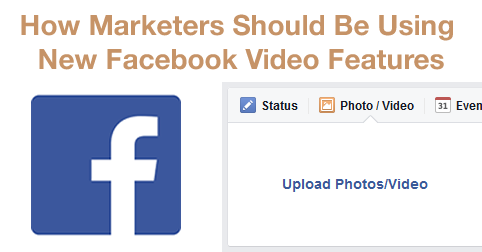 Facebook has some new changes coming this week to videos which will make sharing videos on Facebook a higher priority than before.

Facebook is adding view count onto videos.  This will help users determine the popularity of a video before watching it, and makes it a bit easier to identify trending videos on Facebook.

It wouldn’t be surprising to later see an addition of “trending videos” in the sidebar, similar to the trending stories feature Facebook added.  And of course, that would also open up advertising revenue within trending videos too.

Related videos has long been a popular feature on YouTube.  After all, that’s how many users end up on YouTube to watch a video and then watch ten more related videos before they have realized how much time has elapsed since that initial view.

It also gives Facebook Pages a bit more exposure as well, especially if Facebook will show related videos not just for the Page it was initially posted on, but for all videos that have been posted on Facebook.

If Facebook Pages are sharing videos though, there is always the possibility that related videos could show competitor’s videos, something that Page admins won’t want to see happen, so it will be worth watching to see if Facebook allows Pages the option to restrict related videos to only ones they have posted.  Obviously, for those who post videos personally, this won’t really be needed.

What should video producers do?

One of the things that is key is ensuring that the first few seconds – the ones people generally see while scrolling through their news stream that includes auto-play videos – are enough to capture someone’s attention to watch the whole thing.  While it is common on YouTube to have an introductory screen on YouTube videos, this won’t fly for getting high video views on Facebook, because generally speaking, those initial text screens on a video don’t capture most people’s attention.

There is also the importance of ensuring a video makes sense when an auto-play video is on mute, so adding text to the bottom of a video might be a good idea.

Both of these techniques are something Buzzfeed is doing successfully.

BuzzFeed, a news and entertainment site, now produces many of its pieces with Facebook in mind. Videos are designed to hook a viewer in the first few seconds that they auto-play in a feed, and key points are conveyed through words on the screen so they can be easily understood without sound.

Buzzfeed is also doing something that works well for them virally on Facebook – targeting videos to specific demographics and groups, with the idea that people share videos they know will resonate with their friends.

Ze Frank, president of BuzzFeed Motion Pictures, said Facebook was especially useful for spreading videos that strike a chord with particular groups, such as women, Latinos or Southern Californians, since they tend to share the videos with like-minded friends.

On Friday, for example, two of BuzzFeed’s most heavily shared Facebook posts were “Nine Best Things About Being Filipino-American” and “If Lesbians Said the Stuff Straight People Say.”

Video on Facebook will continue to grow, especially as people take advantage of new features, including a feature to embed videos that will likely be coming.  Facebook is quickly becoming a powerhouse for video, which is seem with the ALS challenge videos.  440 million people racked up 10 billion video views across the 17 million videos that were shared on Facebook.

Google has released a new version of the Google quality rater guidelines, a year after the last … END_OF_DOCUMENT_TOKEN_TO_BE_REPLACED