You are here: Home / Google / Who Owns the #1 Ranking in YouTube for “Back to School”? It’s Bethany Mota 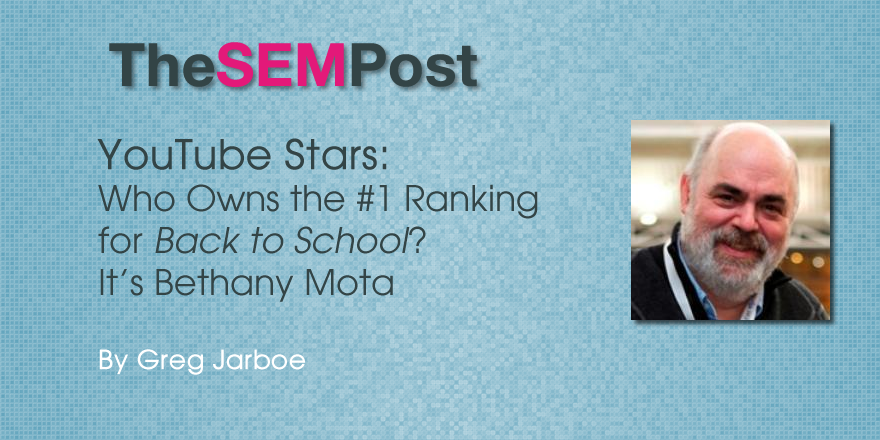 So, who has owned the #1 ranking in YouTube for “back to school” this month? It’s been Bethany Mota.

On Sunday, Aug. 16, I did a search on YouTube for “back to school” and the top organic result was “Back to School: Life Hacks & Easy Tips” by Bethany Mota. Published on Aug. 11, it already had more than 1.7 million views.

And when I started playing Mota’s video, a TrueView in-stream ad from Target appeared. It was “Target Back to School 2015: Jeans Jam.”

On Thursday, Aug. 27, I did another search on YouTube for “back to school” and the top organic result was still “Back to School: Life Hacks & Easy Tips.” Only now the video had close to 3.0 million views.

And when I started playing Mota’s video, “Target Back to School 2015: Jeans Jam” appeared again. Although the TrueView in-stream ad was skippable, it now had more than 2.4 million views.

So, it appears that Mota owned the top spot on YouTube for “back to school” during more than two weeks of prime time. And Target was smart enough to target her video to reach back to school shoppers at one of those want-to-buy moments that are examined over on Think with Google.

What are the keys to Bethany Mota’s success?

Now, search engine marketers probably want to understand how Mota achieved her #1 ranking in a key month. But, they may also be interested in learning how the 19-year-old video blogger from Los Banos, California, is easily pulling down $40,000 a month from her videos alone.
For starters, Mota has the term, “back to school,” at the beginning of the title of her video. That makes it – along with 48.9 million other YouTube videos – relevant.

But what’s earned her the #1 ranking is her video’s watch time. It is 10 minutes and 48 seconds long. And as of Aug. 27, “Back to School: Life Hacks & Easy Tips” had been watched for a total of 37 years. Now, I didn’t make this up. That’s what is reported publicly in her video statistics. 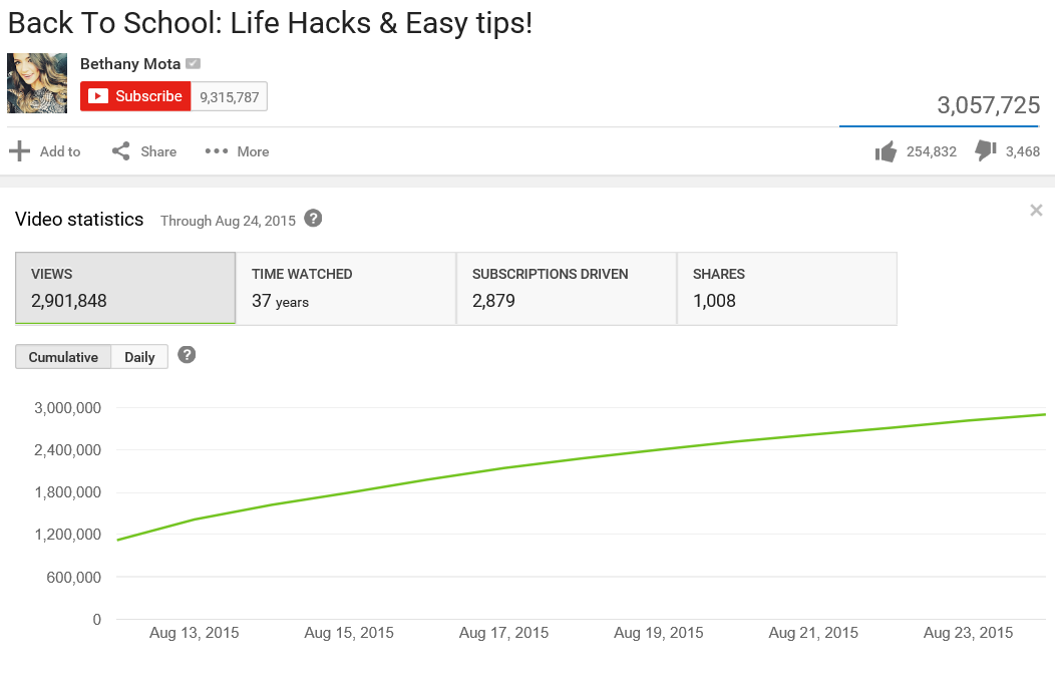 Watch Time is an important metric on YouTube. The algorithm for suggesting videos includes prioritizing videos that lead to a longer overall viewing session over those that receive more clicks. Viewers benefit from more enjoyable content being suggested to them, and creators benefit from more focused, engaged audiences. If you’re making videos that people are watching well beyond the first click, those videos will be suggested more often.

Finally, the video’s ratings are great. It has almost 255,000 likes and less than 3,500 dislikes. The video has 19,400 comments. And it drove 2,879 subscriptions to Mota’s channel and was shared more than 1 thousand times to social media.

So, how does a teenager achieve that kind of success? Well, you know, it wasn’t easy.

In June 2009, at the age of 13, Bethany Mota started her YouTube channel, MacBarbie07, as a way to share her creative fashion and beauty tips. Six years later, a large audience of more than 9.3 million subscribers can’t seem to get enough of her tutorials, “haul” videos, and style advice. How did Mota go from making videos in her bedroom to launching her own clothing line and appearing on national TV? We can learn three important lessons from her success.

During her first few months of uploading, Mota adopted many of the Beauty & Fashion formats that were becoming popular on YouTube at the time. She uploaded “haul” videos (showing off her recent shopping purchases), makeup tutorials, and vlogs with youthful fashion tips. Her videos did well, but her first video to surpass 1,000 views was a makeup tutorial based on popstar Selena Gomez. Mota realized that tying her video to a trending topic—one that resonates with her target audience—increased her exposure. That video’s modest success enabled the videos that followed to reach thousands of viewers too.

Mota’s videos resonate with her audience because her personality, style and themes are perfectly suited to teen interests—and they mirror her own interests. Videos such as “You Are Not Alone” (2010) and “Confidence” (2011) directly address issues central to the teen experience: bullying and self-confidence. And she meets fans where they are: Mota creates “haul” videos and tutorials from her actual bedroom, using items any American kid can find at the local mall.

Following familiar beauty formats helped Mota develop a content strategy and ultimately enabled her channel to reach 200,000 views per month in the first six months. These formats remain a major part of her channel programming to this day.

Given the nature of her audience—high school girls—it’s no surprise that both viewers and engagement increase in the summer. Once Mota noticed the trend, she started to focus her summer videos on back-to-school fashion and beauty tips. The shift paid off. In the summer months of 2012, she attracted 36 million views, and August’s total viewership reached over 17 million views. That year, Bethany solidified her rise to the top of the Beauty & Fashion category on YouTube.

Summer continues to be a key season for Bethany’s channel. School-themed videos average 2.3 million views, which is 125% more than the channel average. She adds the bulk of her new subscribers during the summer, and her back-to-school videos drive 1.5x as many subscribers and likes as other videos.

Forge a genuine connection with fans

Interaction has also been key to Mota’s success. Over the years, she’s built a strong community of followers by interacting with them directly in her videos, in the comments and on social media. As early as 2010, after passing the 6,500 subscriber mark, she celebrated with a video thanking her fans. Again in October 2012, she celebrated 1 million subscribers—or “friends,” as she likes to call them—by answering fan mail and even calling some fans personally.

While “hauls” and tutorials bring a huge number of views to her channel, viewers engage most heavily with videos featuring direct community interaction. When Mota challenges viewers to respond to a specific question or subscribe to her channel, the videos see 10x more comments per view than the channel average.

Videos with the highest engagement can see 232 comments for every thousand views. Her focus on interaction has been integral in attracting new fans and connecting with those she already has.

Her videos with Aeropostale have generated 14.6x more views and 3.7x more engagement than the other videos on the brand’s channel, according to data from Tubular Labs.

From MacBarbie07 to fashion influencer

Bethany Mota has literally grown up on YouTube, and she’s transformed herself into a renowned influencer and a successful brand. Her channel began as MacBarbie07, featuring a consistent schedule of “haul” videos and tutorials. But as she and her channel matured, focusing on back-to-school programming and other compelling videos, Mota shifted gears: She has now branded the channel with her true name (youtube.com/bethanymota).

This change reflects her genuine personality and the strong connection she’s built with her fans. Mota’s eye for fashion, smart programming ideas, and strong relationship with her audience have ultimately enabled her to become one of the most popular and influential beauty and fashion creators on YouTube.

That’s why Target was smart to target her video for its own back to school campaign. Yes, YouTube takes 45% of the ad dollars, but Mota takes 55%. Not bad for a teenager.