You are here: Home / Google / Google’s June Algo Changes: What We Know So Far 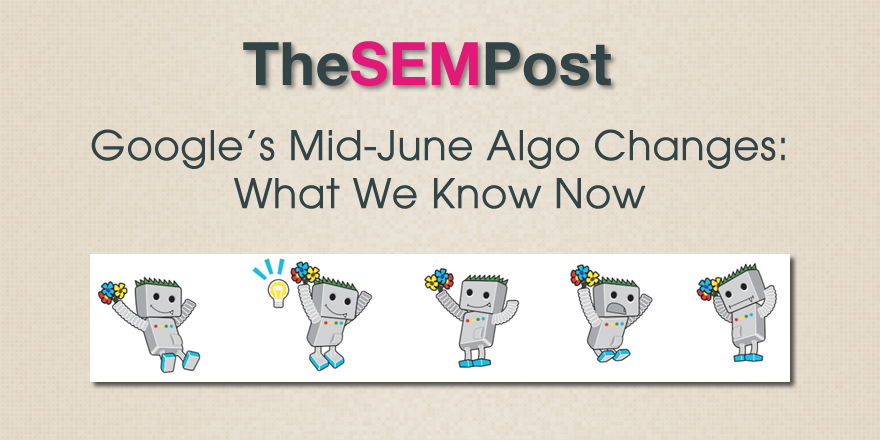 Yes, we have a Google update that is making major waves in the search results.  But before you get excited about it being Panda or Penguin, it is not.

But this is definitely a huge impact in the search results, with Mozcast posting some extremely high (although slightly skewed) temperatures.

Here is what we do know about it so far.

Not Panda or Penguin

Yesterday John Mueller confirmed that the changes were not Panda or Penguin.

Dr. Pete Meyers from Moz wrote a blog post about the changes they are seeing in Mozcast and the possibility it could be HTTPS related.  However, some of the metrics are a bit skewed due to Wikipedia going secure this week, and Wikipedia pages are in many of the Mozcast tracked searches.  Meyers did also analyze the data to discount the Wikipedia effect, and found the temperatures were still very high, just not quite as record-breaking.

@dr_pete just because you never asked me before: I love the name you came up with (Securageddon), but it's nothing to do with https AFAIK

I also received a statement from a Google spokesperson confirming that the changes we are seeing are not Panda related, but one of the many ranking signals that get updated regularly.

“This is not a Panda update. As you know, we’re always making improvements to our search algorithms and the web is constantly evolving. We’re going to continue to work on improvements across the board.”

Google makes hundreds of changes each year, but like the Quality Update we saw last month, this one is much more noticeable than most of the changes they make.

There was speculation that it could be interstitial related, since we also know this is an area Google is wanting to address, and an area many are anxiously awaiting – both from a user experience perspective and because competitors use them.

This is the first noticeable algo change by Google since the Quality Update (sometimes called Phantom II) at the beginning of May, and there is speculation that it could be related to this update. But again, the Wikipedia HTTPS changes are causing some fluctuations in the serps that are making it a bit more difficult to see other changes when trying to look at the bigger picture.

Glenn Gabe is also seeing sites impacted by this originally seeing changes this time around as well.

We will soon be seeing “winners and losers” lists once we have more metrics to analyze from the changes.  Then will be able to better see the types of sites that benefited from these changes, and those that didn’t and have a better idea of what this means for SEO.

We finally have the first Google Quality Rater Guidelines update of 2022, and like usual, it is … END_OF_DOCUMENT_TOKEN_TO_BE_REPLACED