You are here: Home / SEO / What Social Marketers Should Be Watching for 2015 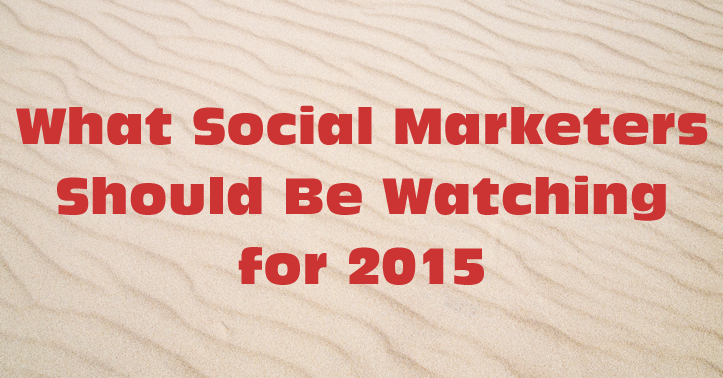 Jon Elvekrog, the CEO and Co-Founder of 140 Proof, a mobile media company that uses social data to improve ad targeting, has some interesting predictions about upcoming trends in ad tech, marketing, social, and data.

140 Proof has created Blended Interest Graph technology, which combines public data from many social platforms. This enables large brand advertisers to target mobile ads to groups of people based on the interests they express in tweets, follows, pins, likes, tumbls, check-ins and the rest of their social activity. Founded in 2010, 140 Proof draws from over 3 billion interest signals every day and has analyzed over 600 million social profiles. With reach to 66 million monthly uniques across their platform of socially connected apps and sites, 140 Proof has run campaigns for some of the largest brand advertisers, across verticals such as automotive, CPG, consumer electronics, technology, entertainment, finance, and more.

Elvekrog isn’t a newbie in the technology space. He has experience in start-up, turnaround, and growth stage companies. He previously held senior executive marketing and sales positions at HP, Microsoft, and LinkExchange. He has an engineering degree with honors from the University of Michigan and an MBA from Harvard University. So, his thought provoking predictions harness the massive, growing data set of the Broad Interest Graph and insights from social interest data.

The Death of Real-Time Marketing

Elvekrog says, “Social media failures in 2014 were too numerous to count. But even for those brands who managed to avoid being publicly shamed for an off-color tweet, how many of them actually sold another bag of chips or another ticket as a result of their efforts? In 2015, marketers need to give up on real-time marketing and use their social profiles to do their job: sell their product to consumers.”

He adds, “During the World Cup, an airline has no place commenting on a referee’s missed call or a fight on the field—they should be talking about how much legroom is on their flights and addressing customer complaints.

The Boomerang Effect: Why All Advertising WON’T Be Programmatic

Elvekrog predicts, “Marketers will discover that 2014’s hottest buzzword—programmatic—is not a silver bullet. After spending untold dollars on bringing their advertising into the programmatic era, 2015 will be the year that they abandon their “all in” approach and begin to incorporate an array of more balanced tactics. Companies that have made the necessary institutional changes to execute on programmatic will now focus their attention and money elsewhere. Like the Crock Pot in your kitchen, programmatic will heat up companies’ advertising strategies, leaving them ample time to get on with the next big thing having built an ample programmatic base.”

Why Marketers Need to Diversify Social in 2015

He observes, “Social networks are becoming increasingly splintered, and while Facebook may still run the show, they’re no longer the only game in town. Instagram recently announced it has more users than Twitter, Snapchat continues to experience rapid growth and Pinterest remains a burgeoning network for image sharing. For marketers, this is yet another reason to embrace a more diversified social strategy in 2015 by allocating budgets for networks they never considered until now.”

A Picture is Worth 140 Characters: Social Platforms Are Becoming More Visual

Elvekrog says, “With the success of platforms like Tumblr, Pinterest, and Instagram, social is becoming a visual-first experience. The top social channels are following suit: Twitter and Facebook have both recently put significantly more emphasis on photos and video, and in 2015, we predict that visual media will completely take over your newsfeeds.”

Do We Have a Right to be Forgotten?

He adds, “Our digital world is beginning to mimic real life – Snapchat provides fleeting moments, while Whisper taps into anonymity. Apps that trend to the ephemeral signal that consumers are growing weary of the permanence of the internet.”

Elvekrog concludes, “Look no further than 2014’s cloud photo hack: people are learning that having their information saved and accessible to all is a terrifying liability. But, with few options available to the average consumer to eliminate their past from the grid, it raises the question: do we have the right to be forgotten? In 2015, we’ll start to seriously consider the following questions about our social presence: